The European Commission has adopted a legislative proposal renewing the Generalised Scheme of Preferences (GSP) for the period 2024 to 2034 on 22 September 2021. The current GSP framework is based on Regulation (EU) No 978/2012 and is set to expire on 31 December 2023.

Based on the insights gained through the Mid-term Evaluation of the GSP and the recently conducted Study on the GSP Review, the European Commission proposes several adjustments to the current Regulation, reflecting changes in circumstances and challenges GSP beneficiary countries face. While the main characteristics of the scheme will be maintained, the European Commission aims to tie the GSP Regulation even stronger to its objectives of reducing poverty, enhancing export opportunities, and incentivising sustainable economic development. Another objective of the proposal is to better reflect the challenges of this decade and the EU’s policy priorities especially in the area of climate change and sustainability. This article provides an overview of the main changes the Commission’s proposal entails. This proposal will have to be approved by the European Parliament and Council.

Until 2026, seven beneficiary countries of the ‘Everything but Arms’ (EBA) are expected to graduate from the Least Developed Country (LDC) category. This implies that they will also graduate from the EBA after a transition period of three years. Countries that are expected to graduate within this timeframe include Bhutan (December 2023), Angola (February 2024), Solomon Islands (December 2024), and São Tomé and Príncipe (December 2024), as well as Laos, Nepal and Bangladesh (expected to graduate in 2026 with an extended preparatory period). Based on the current provisions, Bangladesh would not meet the existing vulnerability criterion. The graduation from LDC status would, however, imply a substantial trade loss and serious shock to the country’s GDP which could be mitigated through inclusion in the GSP+ scheme. The new GSP proposal removes the import-share criterion from the GSP+ vulnerability criteria, which ensures a smoother transition to GSP+ status for the aforementioned countries after they graduate from EBA.

The current GSP Regulation integrates various degrees of conditionality in the different arrangements of the GSP. Beneficiary countries of the Standard GSP and the EBA are required to comply with the core principles of the 15 fundamental conventions on human and labour rights (negative conditionality). The GSP+ takes this conditionality one step further by requiring beneficiary countries to also ratify and effectively implement 27 international conventions including human and labour rights, good governance, and environmental protection (positive conditionality). In its proposal, the European Commission suggests expanding the negative conditionality for EBA and Standard GSP beneficiaries to all 27 conventions including on good governance and the environment. This implies that serious and systematic violations of the principles included in the good governance and environmental conventions could be cause for launching a withdrawal investigation procedure (see legislative proposal, Chapter V., Article 19.1(a)).

At the same time, the Commission suggests amending the list of international conventions that are covered by the GSP+ Regulation. To date, this list includes 27 conventions on human rights, labour rights, good governance, and environmental protection. The Commission’s proposal expands this list by two human rights instruments, two labour rights conventions, one governance convention and one environmental instrument (see legislative proposal, Annex VI). More specifically, this would include:

Current beneficiaries of the GSP+ arrangement would be given a two-year transition period to meet the additional requirements and reapply to the GSP+ scheme until 31 December 2025. They will continue to benefit from GSP+ preferences throughout the application process (see legislative proposal, Chapter III, Article 10.8)

Together with the reinforcement of the conditionality under the GSP Regulation, the European Commission proposes adjustments to the withdrawal procedure allowing the European Commission to react more flexibly and timely to serious and systematic violations of the covered conventions. Part of the proposal is to carry out socio-economic impact assessments as part of the withdrawal procedure to ensure that the withdrawal of preferences reflects country-specific circumstances. The Commission also proposes to broaden the set of indicators that are taken into consideration, including for example migration (see legislative proposal, page 20). The extension of the list of included conventions and the negative conditionality, at the same time, enhances the Commission’s leverage on issues relating to good governance and environmental protection.

Following the recommendation of the Mid-term Evaluation, the European Commission proposes concrete steps to enhance the transparency of the GSP+ monitoring. This includes publishing a detailed description of the monitoring process including the involvement of various stakeholders. Furthermore, as suggested by the Mid-term Evaluation and the Study on the Review of the GSP Regulation, the European Commission proposes to extend the GSP monitoring cycle from two to three years. This would align the GSP+ monitoring with the reporting cycles of major international conventions (see legislative proposal, Chapter III. Article 14).

While the proposal does not include any substantial changes to the list of covered products or the safeguard mechanism, the Commission suggests calculating safeguard thresholds based on import values rather than volumes. This would align it with the calculation of the graduation thresholds. The future GSP framework should be better focussed on those products which are less competitive and those countries most in need of preferential access. Therefore, the proposal suggests lowering the product graduation and safeguard thresholds by 10 percentage points (see legislative proposal, Chapter VI, Article 29.1 on safeguards and surveillance and Annex VI). Safeguard measures do not apply to EBA beneficiary countries and exclude those beneficiary countries with a share for the relevant products below 6 % of total Union imports of the same products. The product graduation mechanism only applies to beneficiary countries of the standard GSP.

The proposal brought forward by the European Commission will be discussed, reviewed, and needs to be approved by the European Parliament and Council. For more detailed information on the Commission’s proposal, please click on the external sources below. 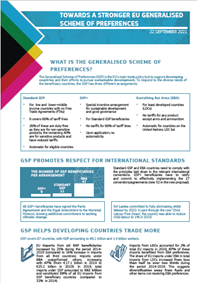