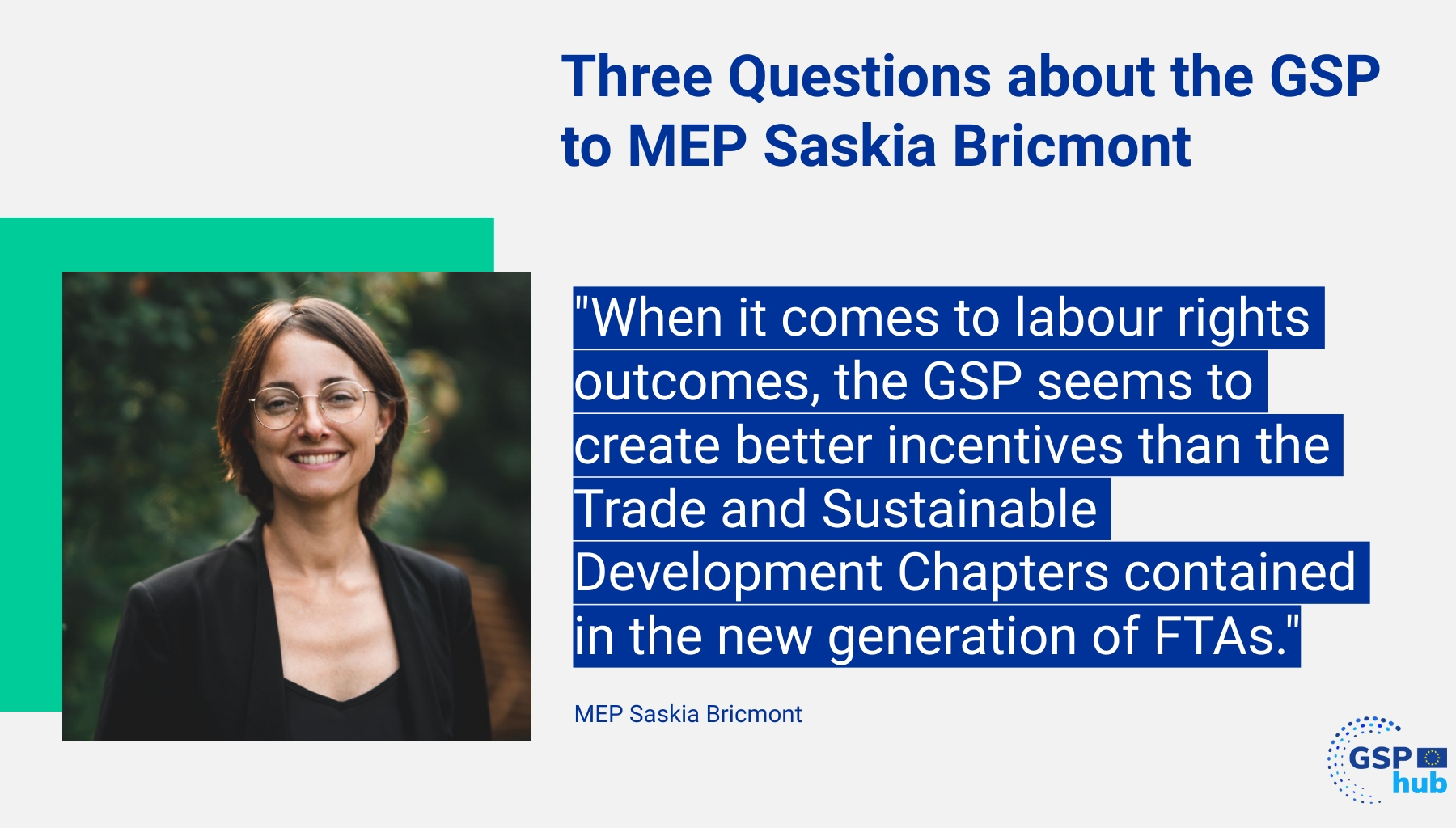 GSP Hub: What impact does the GSP have for the EU’s trade & values objectives?

SASKIA BRICMONT: The GSP is welcome since the scheme contributes to the integration of developing countries in the world economy. From 2011 to 2017, EU imports from the beneficiary countries increased by 44%. EBA countries saw their exports to the EU increase by 125% and GSP+ beneficiaries by 82%. The GSP can also accompany the development of new and more sustainable business models.

The GSP's impacts sometimes go beyond the social and economic dimensions. In the Philippines, the GSP+ was a strong argument against both re-introducing the death penalty and reducing the age for criminal responsibility to nine years of age. Armenia was incentivized to strengthen their labour inspection capacity.

Yet, at the same time, recipient countries may give their economic priority to export-oriented sectors, hereby impeding their economic diversification and their rise on the upper steps of the technology and value ladder.

The positive impact is also limited because of the loopholes created by export processing zones (EPZs) which are exempted from national labour legislation (freedom of association and collective bargaining, protection from discrimination in hiring and unjustified dismissal) and where one can witness violations of human rights. Their existence and special treatment may distort the nationwide impacts of the GSP(+) in developing countries. For instance, the ILO recorded not less than 5.000 EPZs in Bangladesh, the number one GSP partner that doubled its export to the EU between 2011 and 2018.

GSP Hub: How does the GSP relate to other instruments supporting countries to achieve sustainable development? What are potential advantages and disadvantages of the scheme in that regard?

SASKIA BRICMONT: Article 21.3 of Treaty on European Union (TEU) foresees that all external policies should be consistent and that they should support or mirror internal policies. The GSP is at a crossroads between development and trade policies. It also touches upon foreign affairs and acts as an agent of the EU's soft power as indicated previously with the case of the Philippines.

When it comes to labour rights outcomes, the GSP seems to create better incentives than the Trade and Sustainable Development Chapters contained in the new generation of FTAs. The forthcoming due diligence legislative package is expected to complement and support the positive impacts of the GSP.

The GSP should be supported by adequate measures under Aid for Trade (AfT) aimed at improving the capacity building which is a crucial element for the implementation of the referred international texts. Under the same AfT initiative, the EU should recommend beneficiary country governments to put in place tax and redistributive policies in order to benefit the whole population among beneficiary countries.

GSP Hub: In which area does the GSP not live up to its potential and how could this be improved?

SASKIA BRICMONT: In order to bolster economic diversification, services could be included in the next GSP regulation.

Beside the distinction between non-sensitive and sensitive products set in Article 7 of the Regulation, another category referring to products produced according to Fair and Ethical Trade principles could be introduced (in line with SDG12).

As suggested in a 2019 EP report, the Commission could explore further options for the structured, formal and independent participation of civil society organisations, which could serve as potential avenues to strengthen the monitoring process.

The Paris agreement should be added to the list of the 27 core international conventions that GSP+ beneficiary countries must comply with.

Finally, the GSP could pay more attention to press freedom because it feeds economic development by reporting on corruption, bad policies, etc.