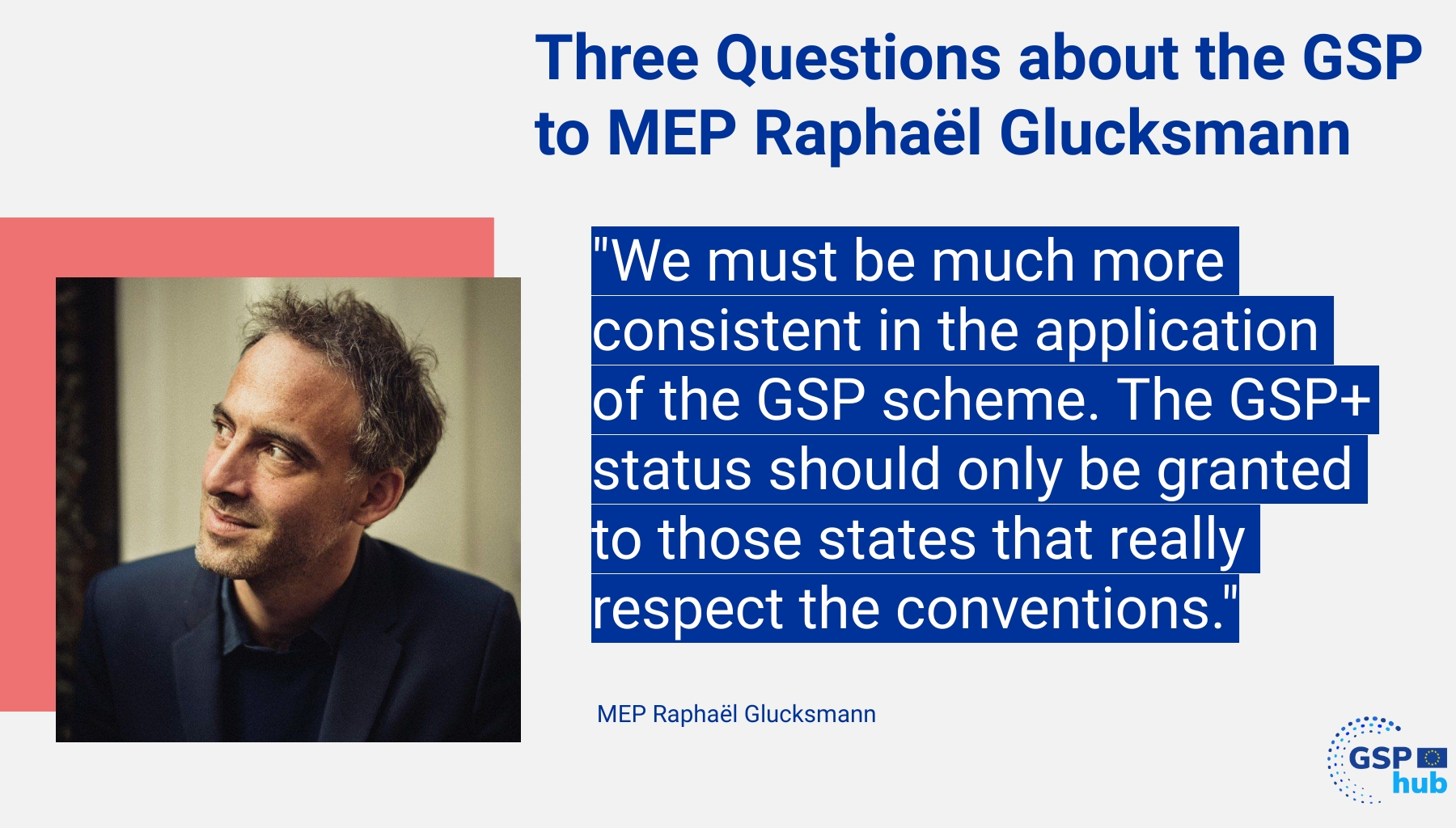 GSP Hub: What impact does the GSP have for the EU’s trade & values objectives?

RAPHAËL GLUCKSMANN: First of all, I would like to insist on the absolute necessity of using our trade power in coherence with our principles: trade must be at the service of sustainable, democratic and social development. Trade cannot be an end in itself, it has to be a means.

The GSP is very interesting in this respect because that is exactly what it does. By making the EU’s trade preferences conditional on compliance with certain conventions and principles, it makes our trade power an instrument at the service of sustainable development. This model should be followed and reinforced because the implementation of the GSP does not match its original ambitions.

GSP Hub: How does the GSP relate to other instruments supporting countries to achieve sustainable development? What are potential advantages and disadvantages of the scheme in that regard?

RAPHAËL GLUCKSMANN: Many countries have or are about to conclude free trade agreements with the EU. They are then leaving the GSP scheme and moving to a new regime under the trade and sustainable development chapter of the FTAs. There we can see structural flaws that the Commission has been reluctant to correct so far.

While violation of the conventions should lead to the withdrawal of trade preferences under the GSP regime, this is not the case under the current FTAs. Once they are signed, the TSD chapters are often forgotten... I do believe we should stop signing FTAs until we have changed this. A revision of our trade policies is urgent, as well as a revision of our development policies in general.

GSP Hub: In which area does the GSP not live up to its potential and how could this be improved?

RAPHAËL GLUCKSMANN: We must be much more consistent in the application of the GSP scheme. The GSP+ status should only be granted to those states that really respect the conventions. It is not the case.

Non-compliance should be sanctioned by withdrawal. It is not the case either. Being more assertive is the only way to remain credible and ultimately achieve results in the field of human rights or environment rules. Political and diplomatic considerations can be taken into account, but these fundamental principles must be ensured.

A revision of the GSP+ application process, for example, could help in this regard. Ensuring more transparency of the monitoring process and a greater role for civil society is key. We have a great tool in our hands, but processes remain so opaque that we are not making the best use of it.

Let us always keep in mind that Assad’s Syria has kept its GSP all the way, after the slaughter of 500, 000 Syrians by the regime. Rules are supposed to be applied or they lose their meaning. And the only way to make sure they are impartially applied is transparency.