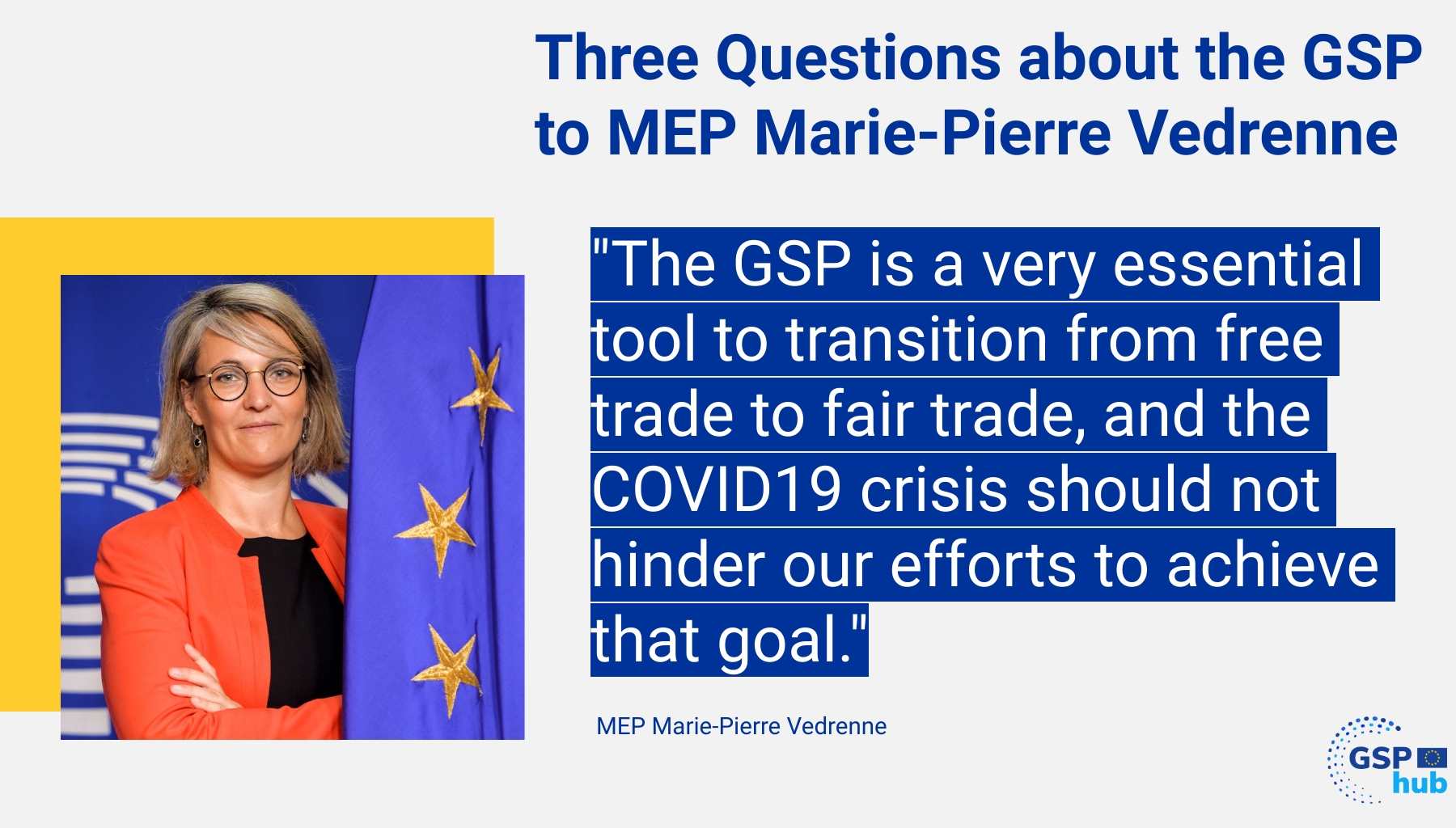 GSP Hub: What is the unique selling point of the GSP and how does it relate to other trade policy instruments of the EU?

MARIE-PIERRE VEDRENNE: Between the Trump presidency and the deep institutional crisis in the WTO, we have seen in the last years that the EU cannot rely on its traditional trade partners.  As the EU is trying to develop its autonomic strategy, the GSP is a very relevant tool. Trade defence instruments such as anti-dumping measures, and the EU enforcement regulation are very important, but we should not focus solely on defence instruments. The GSP is a multilateral tool, which is also what the EU trade policy is about. It allows fostering world trade and is a way to a level playing field for developing countries.

It is also a value based instrument. Countries who want to benefit from this scheme must be ready to commit to human rights. This mechanism links the EU values and human rights to trade.

GSP Hub: What is the role of the GSP, and trade more generally, for a post- COVID19 recovery in the world’s most vulnerable economies?

MARIE-PIERRE VEDRENNE: Trade is crucial for development, especially in these times. It can generate revenue and boost exports by encouraging European companies to import more from the beneficiary countries. Because of the COVID-19 pandemic, countries benefitting from the GSP are facing economic difficulties. The EU should strengthen this policy, extend its scope and show flexibility in the implementation of the GSP instrument. The EU for instance already extended the implementation of the REX system.

The GSP is a very essential tool to transition from free trade to fair trade, and the COVID19 crisis should not hinder our efforts to achieve that goal.

GSP Hub: How could the impact created by the GSP be improved relating to both the economic and values objective of the scheme?

MARIE-PIERRE VEDRENNE: The EU was pioneering in introducing a scheme to expand exports to developing countries in accordance with their needs. It could be improved by being expanded.  As the GSP is already subject to WTO law, the EU should push to replicate its functioning in the WTO to facilitate new agreements. The status of developing countries should be clarified at the WTO. Differentiated approaches should be developed to focus on countries most in need. It is not acceptable that China is still considered a developing country in the WTO.

This instrument could be improved by extending the scope of its conditionality. More commitments could be asked from new partners, not only on human rights but also on the fight against corruption and climate change, with the Paris agreement as a negotiating basis.